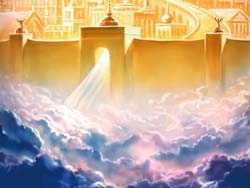 THE MILLENNIUM OF 1,OOO YEARS.

Dot # 1. Rev. 20. The Second Coming of Jesus Begins the 1,000 Years.
Jesus is the “angel” who comes down from heaven (Rev. 20:1) at His Second Coming. He has the key to the “bottomless pit” or this earth in chaotic and broken down condition at His coming. The cities of the nations, full of wickedness, were all fallen in the seventh plague. Rev. 16:19. The wicked were all destroyed by the flame that encircled the earth, and the planet left in utter destruction. On this desolate and empty world, Satan will be “bound” a thousand literal years. There he is left to consider the results of his rebellion against God and His laws. He and his wicked angels are in utmost agony as they have nothing to do, no one to inhabit, no goals to accomplish and the time drags on.

Dot # 2. The Investigative Judgment of the Wicked.
During the 1,000 years, the redeemed are given a work to do.
“Do you not know that the saints shall judge the world [wicked persons]?
…Know ye not that we shall judge angels [wicked angels]? I Cor. 6:2,3.
“And I saw the dead, small and great, stand before God.
and the books were opened, which is the book of life:
and the dead were judged out of those things which were written in the books,
according to their works.” Rev. 20:12.

For one thousand literal years, the court is reopened. God presides over the court session. However, this time there is no Advocate to stand for those who never wanted to know Him on earth. Their sins were never confessed and they revealed no love of truth, of God, or not much for each other. They were determined to serve self and came under Satanic rule. There are those who sold themselves to work evil, to persecute God’s people and delighted to see them writhe in agony from their instruments of torture. There are those who dealt in slavery of all kinds, serial killers, liers, murderers who dealt in stealth and hatred. The filthy in mind and body who loved darkness rather than truth and light. The dictators who were responsible for millions of souls, and the false religionists who kept the people in ignorance by false doctrines to lose eternal life. The cases of the wicked are brought up in that heavenly court.

They are dead, but their names and life works are brought before the people of God who are given opportunity to see the fair, just and merciful treatment of a loving God, but who will not permit sin to destroy the universe or His people. Some of the wicked will be as if they had never been born. Others who caused suffering will feel the effects of their evil deeds.

If the wicked are judged according to their works, will they all receive the same punishment? Will those who have caused many to lose out on eternal life, or caused great suffering for multitudes die the same death as those who never had an opportunity to be free to choose or to know their true condition? Jesus answered that question. He said, “And that servant, which knew his lord’s will, and prepared not himself, neither did according to his will, shall be beaten with many stripes. But he that knew not, and did commit things worthy of stripes, shall be beaten with few stripes. For unto whomsoever much is given, of him shall be much required: and to whom men have committed much, of him they ask the more.” Luke 12:47,48. It is the redeemed who look on as a jury into the heavenly records of every life, that determine the amount of guilt and affirm the justice of God as to the suffering they shall endure according to that which they have caused to others. Long after all the wicked will be consumed, the fire which is in the midst of Satan will burn on until he is completely consumed.

“…therefore, will I bring forth a fire from the midst of thee:
It shall devour thee, and I will bring thee to ashes
Upon the earth in the sight of all them that behold thee.” Eze. 29:18.

When the heavenly court session is finished, every intelligent being in the universe is completely satisfied and know that the character of God has been vindicated. They have seen His love and mercy revealed in the plan of salvlation. They have also seen the administration of justice in that there is a just penaty for causing suffering and misery to others. When all have seen the entire court session, first for the righteous, and then for the wicked, then there is one last demonstration of the results of sin.

Dot # 3. “The Resurrection of the Wicked.”
“But the rest of the dead [the wicked] lived not again until
The thousand years were finished…”Rev. 20:5.’
“And when the thousand years are expired,
Satan shall be loosed out of his prison.” Rev. 20:7

As Satan will be bound down to this empty, desolated earth, with no human living inhabitants, he was as if in “prison.” But at the resurrection of all the wicked of all ages, he is freed to work all over again.

“And shall go out to deceive the nations which are in the four quarters of the earth,
Gog and magog [Satan and his followers],
To gather them together to battle:
The number of whom is as the sand of the sea.” Rev. 20:8.

For What “battle” does Satan plan? What is he wanting to take by force and strategy?

“And I John saw the holy city, new Jerusalem,
Coming down from God out of heaven,
Prepared as a bride adorned for her husband.” Rev. 21:2.

Dot # 4. “The 100 Years of Battle Preparation”
While God’s people are seen through its transparent walls, enjoying the beauties and comforts of the new Jerusalem, they are also able to look out through those walls at Satan as he works and plans for 100 years with all the resurrected wicked to conquer and take the holy city captive. He works among the wicked, energizing them with his own energy. He consults with the great generals of the ages, and those who invented nuclear bombs to find a way to destroy the inhabitants of the city but leave the city intact and ready for occupation. It will take time for Satan to gather and organize this huge company to take the holy city, New Jerusalem. Isaiah explains how long that will take.
‘And there shall be no more an infant of days:
for the child shall die an hundred years old;
but the sinner being an hundred years old shall be accursed.” Isa. 65:20.

Dot # 5. “The Destruction of the Wicked.”
“And they [the wicked] went up on the breadth of the earth,
And compassed the camp of the saints about,
And the beloved city [New Jerusalem]
And fire came down from God out of heaven and devoured them.” Rev. 20:9.

God has promised the people of God that they will “tread down the wicked; for they shall be ashes under the soles of your feet.:” Mal. 4:3 They will be gone, root and branch. There is no burning hell that is eternal. The fire will burn up all that remains of Satan’s rebellion and he also shall burn up in a “short circuit” from his midst, to perish in self destruction. The final fire is so hot that the “elements shall melt with fervent heat.” II Pet. 3:10. Rev. 14: 19, 20. But God’s people will be protected in the Holy City to see the next great act of God. After the fires have died out, and all is quiet, they may sit on the walls of the holy city, to watch once again, the re-creation of the world and the paradise they have so long waited for. Read all about it in Rev. 21 and 22.23

Dot # 6. “The New Heavens and New Earth.”
“And I saw a new heaven and a new earth: for the first heaven and the first earth were passed away.” Rev. 21:1 Isa. 66:22. The great oceans’ waters will be replaced by the original underground watering system, lakes and rivers that existed before Noah’s flood. The broken earth’s rocky skeleton will be healed and covered with verdure. Once again there will be no rain or cloudy days, no more mud or weeds but only that Edenic garden of fragrance and beauty. Many skills and abilities will be restored to mankind that were lost in consequence of sin. Sin shall not rise up a second time.

“The great controversy is ended.
Sin and sinners are no more.
The entire universe is clean.
One pulse of harmony and gladness beats through the vast creation.
From him who created all, flow light, and life, and gladness.
Throughout the realms of illimitable space,
From the minutest atom to the greatest world, all things animate and inanimate,
in their unshadowed beauty,
declare that God is love.”
The Great Controversy 678.